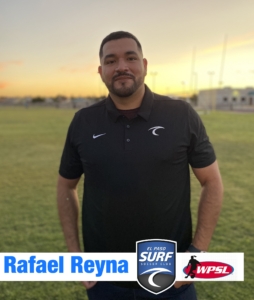 This year has been filled with so many unknowns and uncertainties. Through all this we have used the time to continue to prepare for the moment when we reach a new normal.

Coach Reyna comes to El Paso from the Houston area with an eagerness to get started. He currently holds a UEFA B License and a USSF National B License, along with a history of great experience.

Although the WPSL season was canceled this year due to the COVID-19 pandemic, El Paso Surf didn’t stop working on strengthening the programs they provide. “We knew it was time to bring in well established coach to our staff. We wanted to make sure we added someone that we felt could help us accomplish our goals and that appreciates the Surf mission.” said El Paso Surf’s Executive Director, David Lopez.

Coach Reyna will be the WPSL Teams first official head coach and will have ample time to prepare for the 2021 season, in addition to coaching the college women’s team. Coach Reyna will also be taking on the role as the Youth Clubs Technical Director.

“It brings me great pride and excitement to join El Paso Surf Soccer Club as its technical director and WPSL head coach. The club has a proven track record of developing players and they have ambitious plans to continue to develop the quality of play and players in El Paso. It was an easy decision to join the club once I heard the club’s goals. I look forward to working with the staff, parents, and players as we continue to provide quality training and a developmental platform for the youth of El Paso.” said Reyna.

Coach Reyna has already put in time with the WPSL and WPSL Academy Team. The WPSL Academy Team is filled with aspiring female high school players preparing to play in college with hopes in recieving a call up to play with the first team during the 2021 summer season.

“We want to continue to develop well rounded players and build success as a club. Bringing together the right coaching staff is a crucial part to that. We don’t just throw things together in hopes that they work, we work diligently together to make sure we can provide the best opportunities for all our players. Having Coach Reyna work directly within our youth program as well, will strengthen our current player development program.” added Lopez.

El Paso Surf continues onward to make a difference in the soccer community. The tremendous support from San Diego and all of Surf Nation keeps the Club motivated to provide the “best of the best opportunities and experiences” for their players.